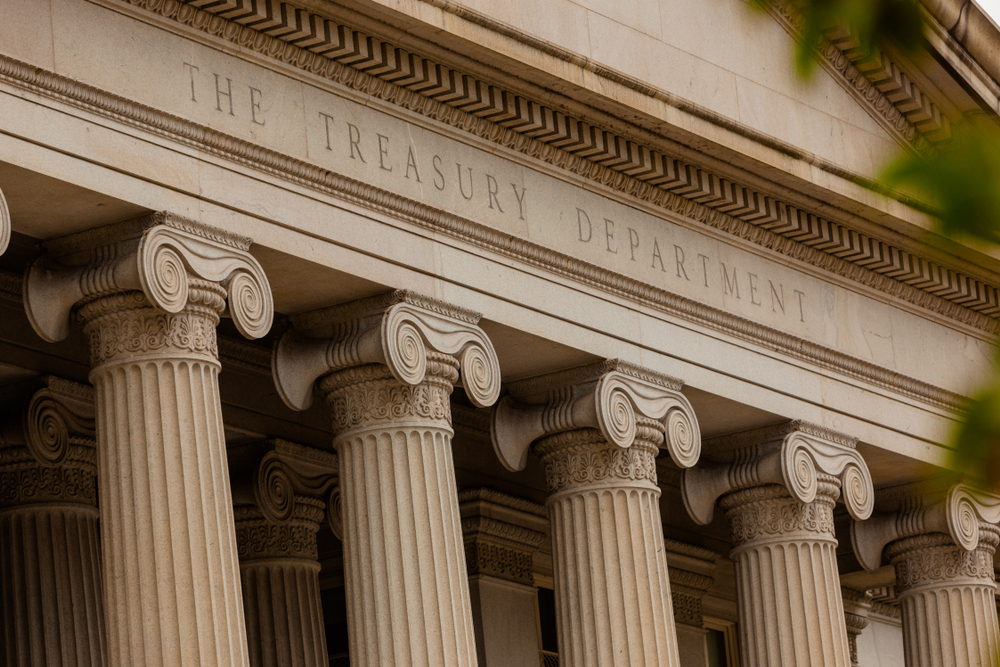 The Fed is taking a fair amount of abuse for being ‘behind the curve’ as it relates to inflation, but that is precisely how the Fed is currently designed to work. Back in the early Fed days, the Fed was always reactive. Policy changes were made when the current situation became clear. That always put the Fed behind the curve by design. That didn’t work especially well, and the Fed eventually switched to a more proactive approach. The rationale was that if the Fed acted sooner, economic downturns would be shorter and recovery faster. But that didn’t work well either, as anticipatory mistakes were made. A few years back, they returned to a reactive market function. When you hear that the Fed is behind the curve, that observation is correct and it is exactly how their methodology is currently designed to work.

What that means is that the economy is fairly strong right now and the Fed is responding in a way that reflects that strength. If the economy weakens, then they will adjust, but they will NOT adjust in anticipation of a weaker economy. Weakness needs to show its face before they respond. We suspect that will happen as the year progresses.

The Fed governors, who are mostly accomplished Ph.D. economists, are sometimes viewed as being super-human economic visionaries – they are not. The Fed has long proven that their collective view is no better than the view from the myriad of other accomplished economists in the world. As the Great Financial Crisis approached, then Fed Chair Bernanke stated “The Federal Reserve is not currently forecasting a recession.” That was in January 2008. The National Bureau of Economic Research later established the start of the recession as December 2007! This brings to mind an old saying about Wall Street economists and analysts: “Often wrong, never in doubt”.

The Bond Market is Pushing Against the Fed

Unlike the Fed, the bond market is clearly worried about a recession in the near future (12-18 months). The evidence of that is in a flattening yield curve (when short-term and long-term rates are almost equal). An inversion of the yield curve (when long-term rates are lower than short-term rates) has historically been a reliable indicator of a recession looming. As of March 18, there are slight inversions between the 20 and 30 year bonds, the 7 and 10 year notes and the 3 and 5 year notes (see chart below). The inversions economists particularly watch are the 2s10s (2 year and ten year) and the 5s30s (5 year and thirty year). We don’t have inversions there yet, but we have been moving steadily in that direction for the past year. A brief inversion generally means little, but the longer an inversion hangs around, the more meaningful it becomes. 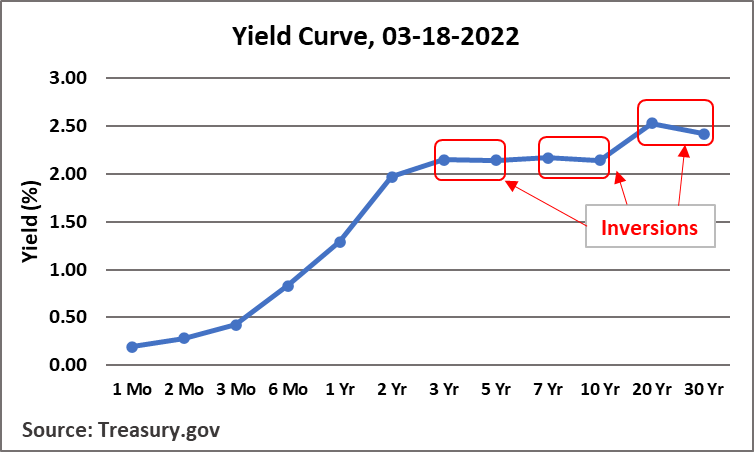 How Did We Get Here?

The Fed’s collective projections for the economy, as released this week, anticipate that the currently strong economy will remain strong and the unemployment rate will remain at roughly 3.5%, despite the impacts of inflation from COVID-related supply chain disruptions and demand surges. As long as the conflict in Ukraine continues, we can also expect a strain on energy and food commodities, particularly wheat.

With the anticipation of a strong economy, the Fed projects seven rate hikes this year, including the one this week. We suspect they really have no idea if all those hikes will be required, but the projection of seven hikes is very useful in sending a message to the outside world: “The Fed is serious about addressing inflation” and that is an important message if inflation expectations are to be kept under control.

This economic soft landing (continued growth as interest rates rise) may be possible if wage gains are able to match the pace of inflation, leaving the consumer relatively unaffected and allowing business to pass though inflationary cost increases in the form of higher prices. However, it rarely works that way.

Inflation is disruptive. Inflation generally has the effect of slowing growth and pressuring corporate profitability. When gasoline suddenly costs 30% more than it did last month, most consumers buy less ‘other stuff’ as a response. Something has to give, because their paycheck isn’t any different than it was last month. The implications include lower corporate profit margins and weaker consumer spending, at the margin. That is the definition of a weaker economy.

The Fed may truly believe that there is little chance of a recession, but the Fed is reactive by design. They will not recognize economic weakness until it arrives and quite possibly, as in 2008, after it arrives. The bond market, however, is beginning to sniff out a recession.

Fed Transparency is Not the Silver Bullet Either

Up until the Greenspan Era, the Fed acted in the shadows and made occasional pronouncements of policy changes, which could come at any time, not on a published schedule. Greenspan began the era of the transparent Fed, although the initial transparency was anything but. Greenspan was famously quoted as saying “If I’ve made myself too clear, you must have misunderstood me”. Nonetheless, over time, Fed transparency increased and was viewed as a good thing that would eliminate uncertainty about the direction of policy.

We can fairly say that the policy of transparency has also failed. We now have a Fed that uses that ’transparency’ to signal markets. The problem is that the Fed statements can’t be completely clear because the future is very uncertain and the signals remain open to interpretation. This week is perfect example. In a world that is notoriously difficult to project, the Fed projection just happens to completely coincide with the Wall St. consensus of seven rate hikes this year. Is that what they really believe? Or is it just an attempt to signal that ‘Hey, we see inflation too and we will respond’?

US yield curve has been flattening. Why you should care

The controversial quest to make a ‘contagious’ vaccine

Putin lays out his demands in Turkish phone call

Shells rain down on Kharkiv as Ukraine’s army stands firm

How much can — and will — China help Russia as its economy crumbles?

US concessions in nuclear talks a boon to Iranian, Russian economies

Does the Financial News Have You Confused? Here is a Simplification | March 6, 2021

Does the Financial News Have You Confused? Here is a Simplification. Today’s world of instant and constant information can easily put us in a position where we can’t see the forest for the trees. Stepping back from the constant barrage of seemingly conflicting financial data points and focusing on the ‘forest’ can be an enlightening […]
Read More

Are we in a Bubble, and if so, is it Ready to Pop? Over the years we have experienced some crazy weeks in financial markets. This week is one right up there with the craziest of them. The big topic with investors and non-investors alike is: ‘Are we are in a financial bubble?’. The craziness […]
Read More