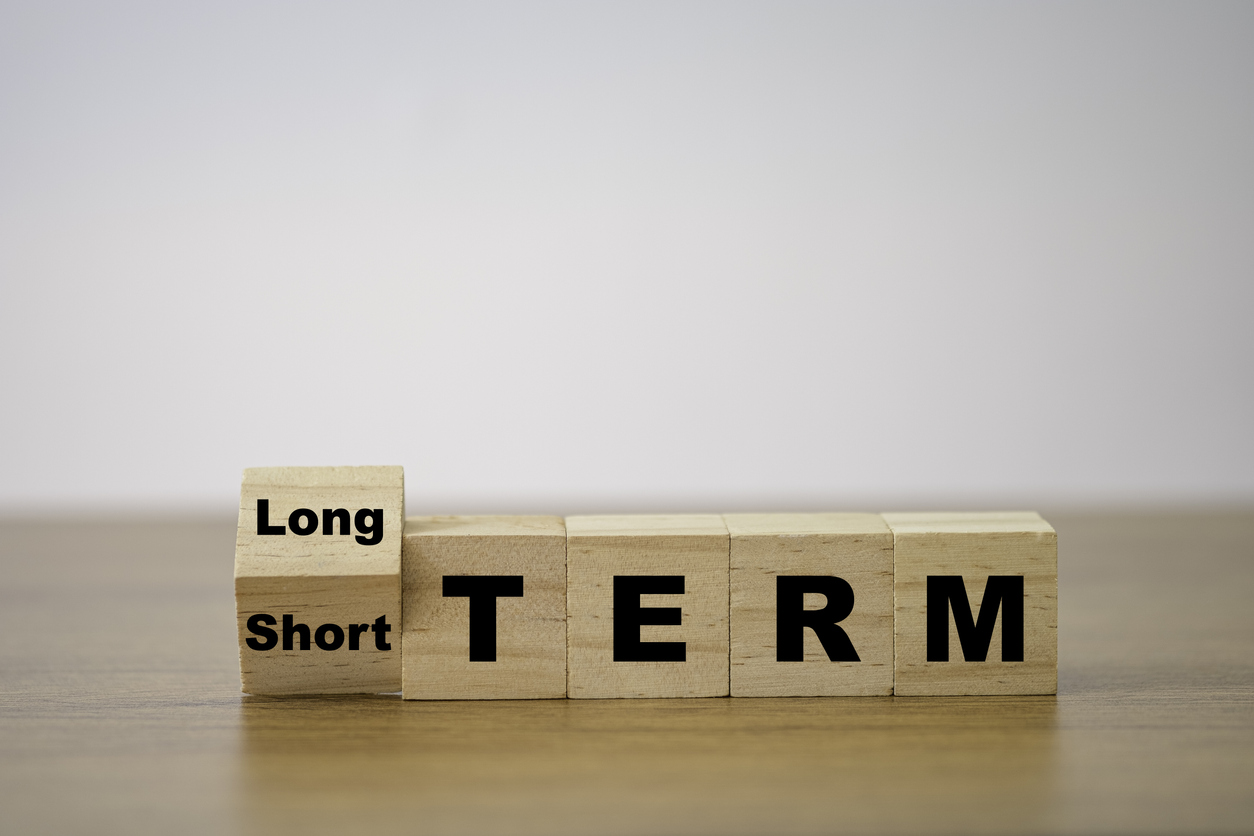 The Long and Short of Interest Rates

When the week started, it appeared that short-term rates would be the ‘story of the week’ due to a planned drain of Treasury cash (See “Are Negative Rates Coming Despite Fed Opposition”, below.) However, on Thursday, long-term rates took center stage as the 10-year yield jumped from a 1.38% close on Wednesday, to an intraday high of 1.61% on Thursday. That is a frightening rise of almost .25% within a matter of hours. Rates have been steadily heading higher through February, but this was a shocker and the catalyst appeared to be a very ugly Treasury auction of 7-year notes, which was described by some as ‘the closest we have ever come to a failed Treasury auction’.

The situation eased on Friday and the post-mortem appears to conclude that the crazy action on Thursday was due more to ‘technical factors’ than any real change in the expectations for reflation of the economy or inflation. The very poor auction set traders off to quickly de-risk portfolios, causing a temporary liquidity crunch in futures markets, which exacerbated the rate move. We are drawing two conclusions:

While the focus of the bond markets has been on the rise in longer-term rates. Somewhat in the background, there has also been some action in short-term rates, which have been cut in half from already very low levels. There is increasing chatter that we are about to experience negative short-term rates in the U.S. which is a place the Fed has emphatically said it does not want to go. What is happening is that some announcements from the new Treasury Department are putting the Fed in a tough spot. The Fed claims it has the tools to respond, but this could require even more Fed intervention into markets and in in the manner to which we have become accustomed. This could require the Fed to tighten monetary policy. Here is what’s going on.

In the wake of the pandemic, the Treasury borrowed huge sums of money to fund the $2 trillion CARES Act for COVID relief and presumably in anticipation of more money being needed. Although we are now considering another $1.9 trillion stimulus package, much of the money raised by the Treasury during the emergency last Spring was never spent and sits at the Federal Reserve, to the tune of about $1.5 trillion. (See the chart below) 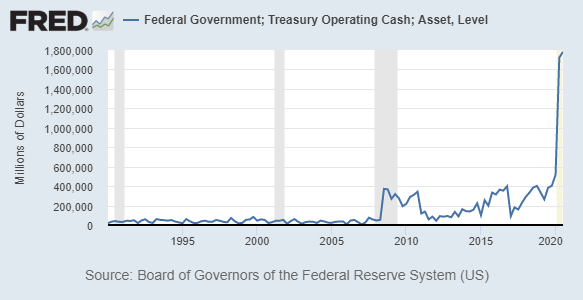 The Treasury has announced that it will reduce this cash surplus to under $500 billion by mid-year. This liquidity drain at the Treasury is a liquidity faucet for the banking system and assuming the Fed continues to buy $120 billion/month in QE (Quantitative Easing), we could see a liquidity increase of truly massive proportions, to the tune of about $1.6 trillion.

The concern is that his flood of liquidity will drive short-term rates even lower and into negative territory, which potentially complicates matters for the Federal Reserve and the economy. The ECB embraced negative rates following the Great Financial Crisis (GFC), but the results have not been as effective as anticipated. The Fed wants to avoid those issues and may need to intervene in markets yet again, to prevent that from happening. We do not view this as a good situation. We are not anxious for the U.S. to embrace negative rates, but we are not fans of further intervention either. At some point we need the Fed withdraw intervention and allow markets to function on their own once again, although we are nowhere close to that point.

What can the Fed do? Here are some possibilities.

It is clear that the decline in short-term rates is anticipating this issue, but we don’t think it will blossom into a calamity as the Fed is well aware of what is happening. In fact, in Congressional testimony this week, Chairman Powell was specifically questioned on this topic.

In an odd way, this might actually help the Fed. We have speculated that at some point the Fed would implement Yield Curve Control (YCC) to hold down long-term rates. Some of the options above would allow them to effectively begin YCC without calling it YCC and in the process keep a lid on long-term rates too.

What is disheartening is that after all this time, we are still in a position where Fed intervention is necessary, which implies we are a long way from returning to ‘normal’ markets.

We are regular readers of a daily email from Bloomberg titled “5 things to start your day”. This week it touched on a topic that has been bothering us a bit – the concept of Bitcoin as ‘digital gold’. The relationship is not one that we put much stock in. After a very strong 2020, the recent malaise in gold is understandable based on historical factors that have nothing to do with Bitcoin.

Over the long-term, gold has been a very reasonable store of value, even as it sometimes strays from that function for periods of time. To put that in perspective the price of gold in 1930 was about 20.65, giving a kilo of gold a value of about $728, more than enough to buys a well-appointed 1930 Chevy Six, which had a price of $555 to $755. Today, a kilo of gold, based on a gold price of $1800/oz, has a value of over $63,000, more than enough to buy a well-appointed Chevy Impala, or even an SUV. At least in this example, gold has held its value extremely well unlike the currency sitting in your wallet, which seems to have no limit to supply.

Gold has thousands of years of history as money. While the supply of gold can increase, those increases are constrained by the increasing difficulty of finding and mining gold economically. This supply constraint has made gold a better store of wealth than fiat currency (paper money) over the years. Bitcoin has a permanently fixed supply, which has led to comparisons with gold, and Bitcoin is often described as ‘digital gold’ by proponents.

Bitcoin prices have accelerated rapidly over the last few months while the price of gold has languished. That has raised the question of whether Bitcoin is stealing golds’ thunder and is becoming digital gold. We think the Bloomberg story correctly concludes that there are some very good reasons why gold has languished, none of which relate to Bitcoin.

Historically, there have been periods when gold has performed well and when it has performed poorly. Unlike bonds, gold does not pay interest or dividends, so the lower rates go, the more attractive gold is on a relative basis. On the other side of that coin, as rates rise, gold tends to weaken because it is less attractive on a relative basis. The chart on the following page shows this relationship graphically. The gold price is the yellow line and the 10-year Treasury Note rate is the white line. Note that the 10-year yield is graphed on an inverted scale, meaning that the white line goes down when rates are rising). The correlation here is clear – When rates go down, gold tends to strengthen and when rates go up, gold tends to weaken. More important, it shows that his valuation relationship has not been altered by the emergence of Bitcoin as an asset class. 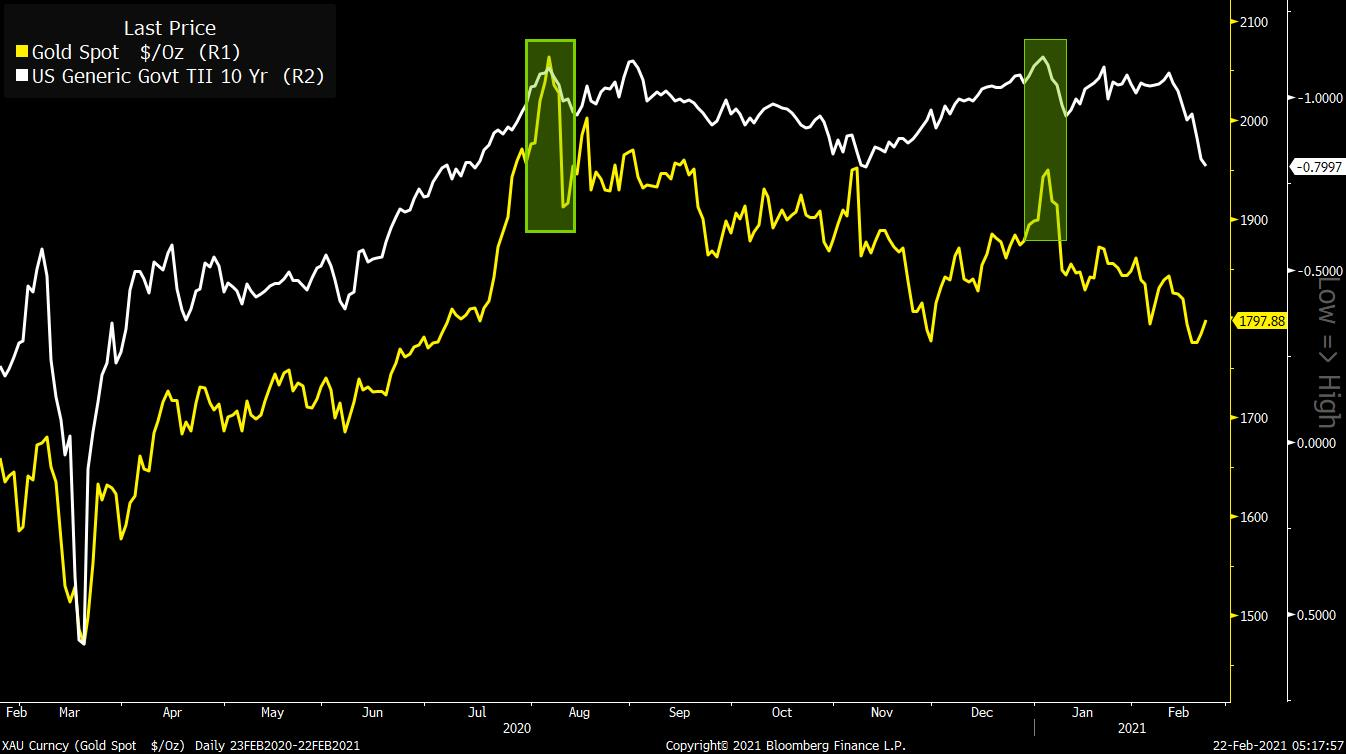 As an inflation hedge, higher gold prices are connected to a weaker dollar. This makes sense because a weaker dollar is inflationary (it makes imported goods more expensive). The value of the dollar, relative to other currencies, is related to the relative level of interest rates. Higher U.S. interest rates, as compared with other countries, will tend to strengthen the dollar as foreign investors choose to buy the stronger (appreciating) currency and receive better yields. Conversely, lower U.S. yields will tend to weaken the value of the dollar.

The implication is that gold is acting as expected and Bitcoin is off on its own, unrelated to gold. It would then also follow that Bitcoin is simply another speculative asset class responding to excess market liquidity and is therefore unlikely to be an effective hedge for equity risk. Gold, on the other hand, appears likely to retain its place has an inflation hedge and a strong diversifier for portfolios.

Big moves and liquidity woes in a U.S. bond ‘tantrum without the taper’

People’s desire to get out will drive economy forward (4 min. video)

How Global Health and Wealth Has Changed Over Two Centuries (1 min. video)

11 Money Moves to Make in the Decade Before You Retire

It’s your last chance to get your affairs in order and make sure you have everything set up for a comfortable retirement.

Five Ideas for Your Tax Refund

Yes, a large refund is a forced savings strategy, but there are better ways to save if you can manage to be a bit disciplined.

Getting a COVID-19 vaccine is a personal choice. To support you as you make your decision, here are 12 facts and insights from Johns Hopkins Medicine.

The R&D credit is often overlooked by small businesses and their return preparers, it’s not as easy to qualify for the credit as some of these companies want small business owners to believe.

“When we have gold we are in fear, when we have none we are in danger” Gold is often considered the ugly duckling of investing, we think, unfairly. Gold doesn’t generate cash flow; it exhibits some volatility with prices often moving in fits and starts. But, from a portfolio manager’s perspective, the reason for adding […]
Read More

Cross-Currents The post-pandemic world will be different. Cross-currents are everywhere and how this settles is anything but clear, but ultimately everything resolves and typically not at the extremes. The economy is recovering, but persistent government intervention continues to cause market distortions. This has led to excesses in markets and very high asset valuations. As portfolio […]
Read More

Asset Class Return Projections The higher asset prices rise, the lower the expected return on an asset is. That sounds counter intuitive, but if assets rise to their true value, then the higher the price goes, the less upside there is left, i.e., expected returns are lower. This concept is important as many asset prices […]
Read More