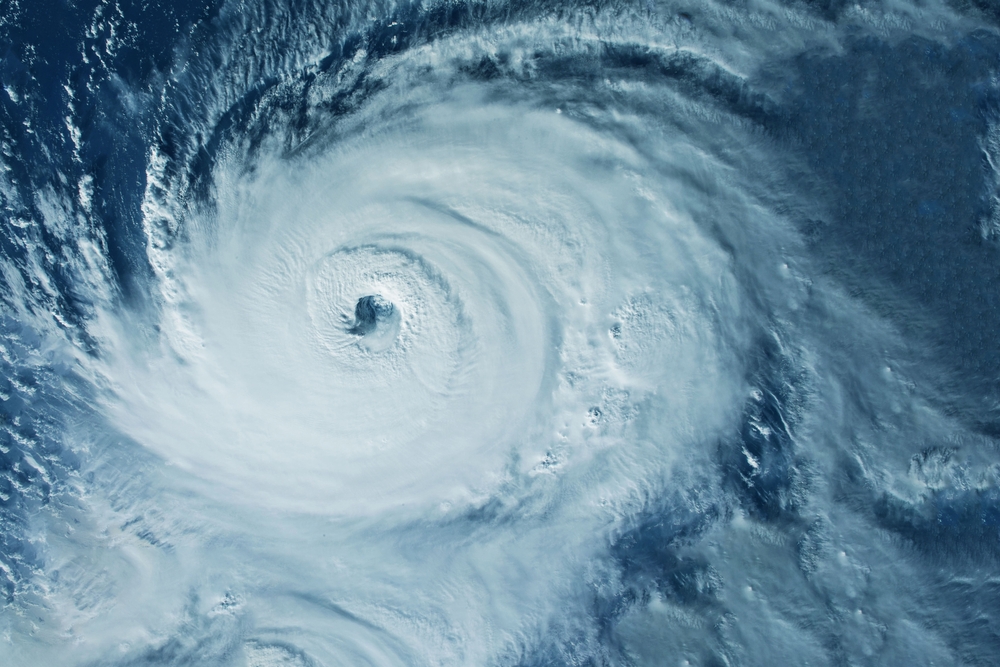 Sheltered from the Storm

The bear market rally in July and August had many people hopeful, but that rally has now disappeared and we are essentially back at the June lows on the S&P 500. All this has happened as the Fed has consistently raised interest rates to address inflation, which has sent the bond market down along with stocks. In fact, this is the worst performance year for Treasury bonds and the bond market in general since at least 1928. (See chart below). Don’t peak at your 401k this quarter, it might look more like a 301k.

This is one of those occasional times when the correlation of various asset classes gets very high and diversification doesn’t work very well. Fear not, we have seen these periods before, most recently in March of 2020, and they will come again in the future, but over the long run, diversification still works. 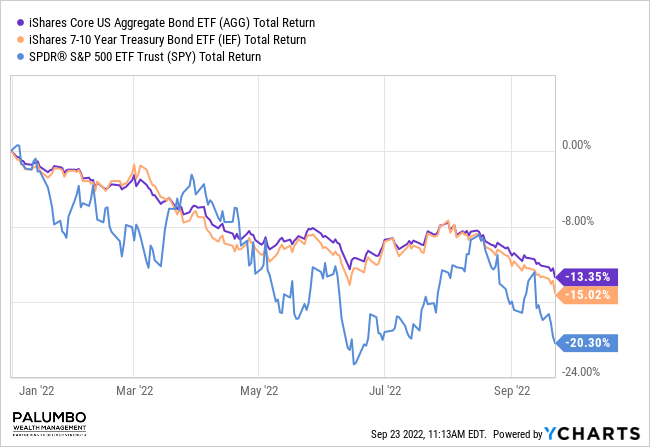 Eye of the Storm

If you have ever been in the eye of a hurricane, it is a surreal experience. There is dead calm, while all around you, beyond your vision, there is climatic mayhem. In many ways, living in the U.S. today is very much like being in the eye of the storm. Because of the preeminence of the dollar and because we earn and spend in dollars, we are insulated from many of the global impacts of our policies.

In 1971, then Treasury Secretary John Connally famously said at a G-10 meeting “The dollar is our currency, but it’s your problem”. That was under very different circumstances than we have today, but the comment still rings true. The concern today is that the rising value of the dollar is exporting inflation and exacerbating inflationary pressures on the rest of the world. Here in the States, we tend not to notice the damage, but the value of the euro and the Japanese yen are at two-decade lows relative to the dollar, and the British pound is at its lowest in about 40 years. The pressure being applied to economies all over the globe is reaching extremes.

The U.S. Dollar Index (DXY) is a measure of the value of the U.S. dollar relative to a basket of foreign currencies. Over the last 12 months, that value has risen by almost 20%. The strength of any currency is based on a multitude of things, but chief among those are the relative economic health of the home country. Weaker economies will tend to have weaker currencies. With Europe in disarray and a weak Chinese economy, the relative attractiveness of the dollar to international investors has increased.

Cross border investment also plays a role in currency valuations. As interest rates rise here in the U.S. it creates a greater incentive to invest here, rather than other countries that have lower interest rates. Other things being equal, investors would rather earn a higher rate in dollars than a lower rate in their native currency. That investment demand re-enforces the value of the dollar. 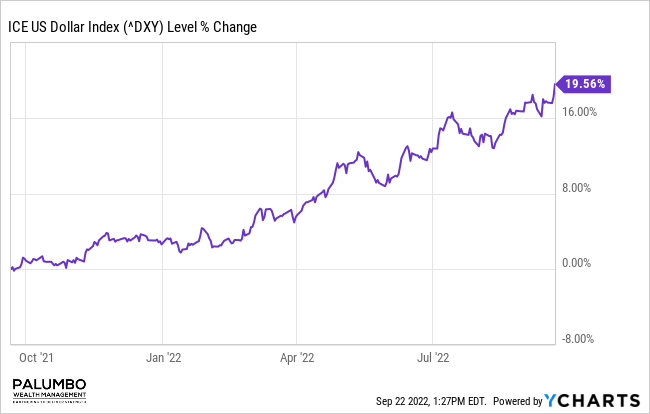 The value of the dollar affects the world

What we don’t see here in the U.S.is that many things cost a lot more in other countries because of the strength of the dollar. The reason is that global commodities are generally priced in dollars. That means that it takes more local currency to buy those commodities. So, if prices are up 5% in dollar terms and the dollar has increased in value relative to my currency, prices for buyers outside the U.S. are up more than 5%.

Here is an example: In 2019 the price of a pound of copper was about $2.50. At the time, the Euro/Dollar relationship was about 1.12 Euro per dollar. That means that the price of copper in Euro terms was €2.73.

This impact is most apparent in commodity importing/goods exporting countries, like Japan, China and South Korea. All have been facing pressure on their respective currencies as a result of the strong dollar and that pressures corporate profits and threatens local economies around the world. Back in August, Richard Bernstein Advisors, noted that “Historically, when the DXY Index has appreciated 15% y/y or more, a profits recession has typically followed within one to four quarters thereafter.” With DXY now up almost 20% over the last year, the risk of a ‘profits recession’ due to weak international markets would appear to be elevated.

At some point, countries are forced to defend their currency values as a means to defend their economy. That is sometimes successful, but other times it can be disastrous as central banks spend their reserves defending their currency and when those reserves run out, a currency collapse follows (see Argentina economic history). Japan, in particular, has been a focus of attention as the Bank of Japan has refused to budge on a zero-interest rate policy while U.S. interest rates rise sharply. That has made the Yen a prime victim of dollar strength. On Thursday, the Japanese Central Bank began to intervene to support the Yen (that is, sell Dollars and buy Yen). In light of their refusal to budge from zero interest rate policy, that intervention would ultimately appear doomed to failure.

The U.S. is raising interest rates to fight inflation here, and that is making the dollar stronger. In turn, that makes inflation worse outside the U.S. and negatively impacts economies around the globe. The point is that we can’t continue to think “The dollar is our currency, but it’s your problem”. Unlike 1971, the global economy is now highly interconnected. We need to get inflation under control, but we also need to be mindful of the rest of the world. If a strong dollar blows up the rest of the world, there will be a price to be paid back home too.

A large part of the current strong dollar story is the Fed raising interest rates, which they did once again this week, bringing the federal funds rate to a range of 3.00% to 3.25%, a level last seen in 2008. Fed Chair Powell reiterated their dedication to bringing inflation under control and their internal projections would indicate that the committee believes rates will top out at about 4.4%. Of course, their projections have been consistently wrong, too, so we have little faith in that outlook. The message we received from the data and Chair Powell’s comments were:

The Fed to Europe’s currency crisis; what’s behind the selloff in financial markets

Inflation Is Best Explained by This Underrated Economic Theory

Russia’s Oil Exports Are Set To Plunge Next Year

Is It Time to Pay More Attention to Bitcoin and Other Crypto-Currencies? | March 26, 2022

Is It Time to Pay More Attention to Bitcoin and Other Crypto-Currencies? The sanctions placed on Russia are extraordinary in that central banks are used as a weapon, freezing Russian state assets and Russian Oligarch assets that are held in Western Countries. This is a first, and could have several important repercussions. This action could […]
Read More