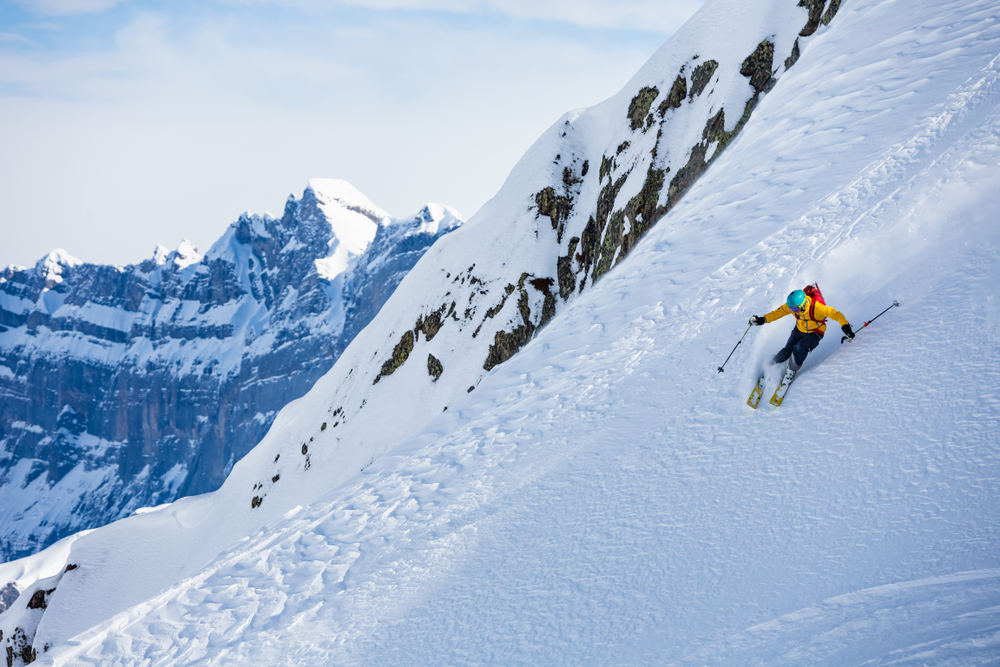 Coasting Down the Mountain

While you probably don’t read the financial news every day, if you did, I suspect that by this point you would be surmising that the Fed is a bunch of bumbling idiots. I’m here to tell you that they are not. They are incredibly bright individuals that probably have too much confidence in their economic models. That distinction is an important one, because it implies that the Fed is not guessing, it is acting in a way that it believes is rational to achieve the desired result – a relatively ‘soft landing’ for the economy.

Here is the Fed’s current problem: If we imagine inflation as a mountain, we have used the incredible COVID stimulus to power us up the mountain into the land of inflation. Now we are at the top, with no fuel left, and we need to mange our way down the other side of the mountain, back to the land of low inflation. We want to get there as quickly as we can, but our speed must be carefully managed. The road down the mountain is winding and there are parts that are flat or slightly up hill. As we coast down the hill, we need to maintain enough speed to overcome those uphill areas, but we also can’t go too fast, because then we could miss a turn and go over the edge. (That would get us to the bottom of the mountain quickly, but with catastrophic results).

For the Fed, getting inflation down requires a series of maneuvers to slow the economy at times (hawkish actions or speeches), but not too much, and to position the economy to take advantage of the downhill straightaways (dovish actions and speeches) to gather enough speed for the next leg of the trip.

So, while Wall Street overreacts to every little bit of ‘information’ from the Fed, it misses the perspective of the trip we are on. That doesn’t mean the Fed succeeds. We can still drive over the cliff into recession, or we can run out of momentum and be stuck in a high inflation environment. However, it does imply that we are far too focused on each and every real or perceived movement by the Fed. We need to keep our eye on the prize, which is to navigate down this mountain without getting stuck on the mountain and without going over a cliff.

What that means for investors is that we should expect a Fed that flips back and forth between hawkish and dovish as they attempt to control the speed of the car/economy. What is important is not how hard the Fed might be stepping on the economic brakes (i.e., how much the next rate increase is). What matters is how the car/economy is responding. If you are an investor just waiting for the Fed pivot (as most appear to be), you have to be careful what you wish for. If the Fed quickly pivots and lowers rates, it is because they have driven off the proverbial cliff and crashed into a recession.

The Fed targets core inflation, which is inflation ex the very volatile food and energy sectors. Housing (called shelter in the inflation data) as been a key concern because

A part of that stickiness lies in the methodology of the calculation. Suffice it to say that this data appears with a significant lag.

The only way core inflation falls back into line is if we have a correction in the housing market. In short, prices have to come down and they will. Here’s why: The chart below shows the mortgage payment on a median priced home over the last 2+ years. To put that in perspective, median family income in 2021 was $88, 590. That puts mortgage payments at 34.5% of gross median family income. Home affordability is a serious issue today. 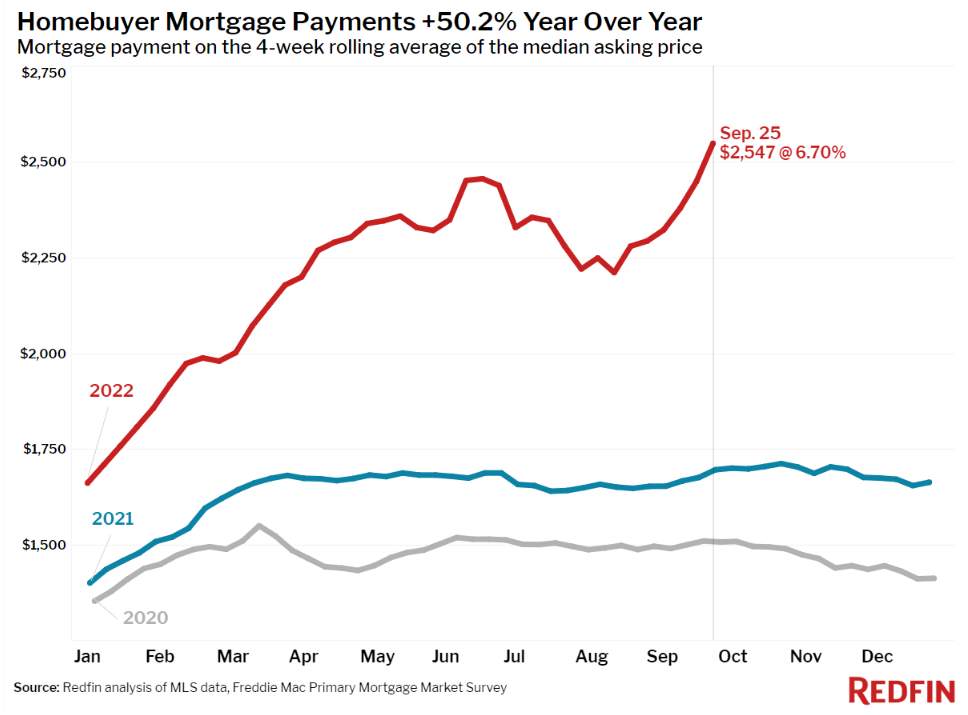 House prices were juiced by the pandemic, and now that needs to correct because housing has simply become unaffordable. The pace of mortgage applications is now at a 25 year low and mortgage rates are the highest since 2006, so that correction has already begun, but it is not nearly complete enough for the Fed to declare victory over inflation.

In the chart below, the hump on the left is the housing bubble that resulted in the Great Financial Recession of 2007-09. The most recent run-up of home prices dwarfs the early 2000’s advance. That is not to say that another GFR is upon us, but it is very clear that prices have again gone overboard and a 2008-2010 style price correction is in order. The severity of the recession required to do that is up for debate. 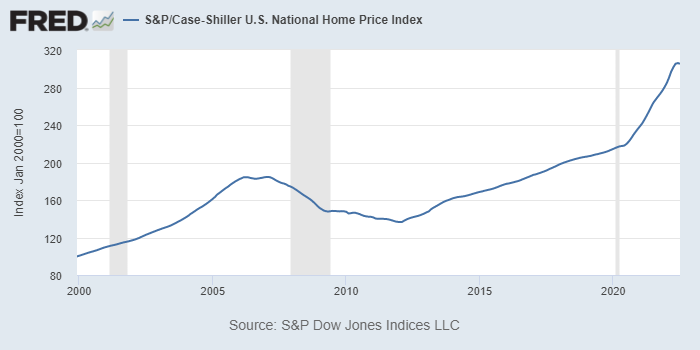 We suggest that if you want to judge how well the Fed is maneuvering the car down the mountain, don’t pay any attention to the speculation about rate hikes; keep an eye on the economy and particularly housing. Pending sales continue their downtrend and that will rattle through the economy over time. 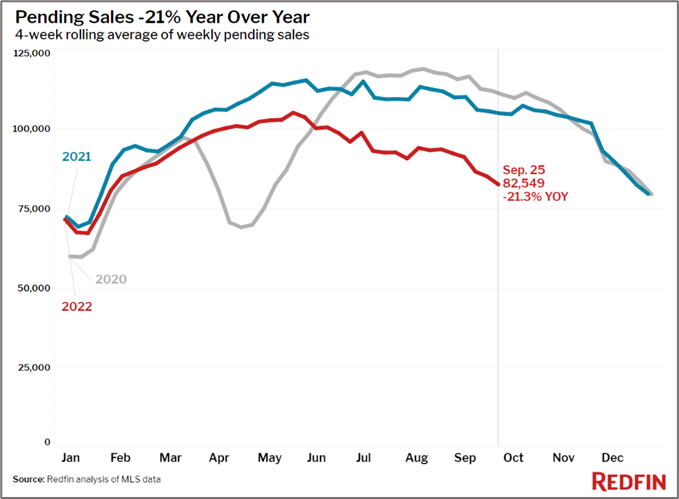 As former Fed Chair Greenspan might say, food and energy are a conundrum. There is precious little the Fed can do about food inflation. They can’t really reduce demand, nor can they increase supply. Markets need to take care of those things by themselves, but there is nothing like a couple of strong, back-to-back growing seasons to get this under control again. Fingers crossed.

Energy demand can be impacted by the Fed, but only at the cost of a recession and the Fed is unlikely to push that hard against energy inflation alone. Energy prices are far too unpredictable and far too volatile for the Fed to have any confidence that they can improve the situation. If core inflation is aligning with Fed targets, the Fed is more likely to allow energy markets self correct than to force a recession.

Nonetheless, energy presents plenty of inflation risk. Europe made its deal with the devil and is now paying a heavy price. Here in the U.S. the situation is not so dire, but we have also limited investment in traditional energy and that lack of investment is now hurting us too. In both cases, it takes years, not months, to eliminate those problems. Who might bail us out? Keep reading…

OPEC+ (that is, OPEC and Russia) met this week and delivered a blow to the West by apparently agreeing to cut production by some 2 million bbls/d, although that number lacks clarity. Is that an immediate change, or one that is phased in over time? In any case, it would appear that OPEC is again flexing its muscle and it appears to desire a Brent Crude price of roughly $100/bbl. (Current price is about $93/bbl). If the reduction is enforced, it would be a clear poke in the eye to the U.S. and play into Putin’s hand as it tends to maximize the economic pain in Europe this winter. A particularly cold winter in Europe could be devastating.

The Biden administration quickly countered the OPEC+ announcement with a deal to lift some sanctions on Venezuela allowing Chevron to pump more oil. Details are sparse here as well and the lack of investment over a long period of time in Venezuela implies that this is not a near term fix, but could help in the long run. Necessity is the mother of taking chances (Mark Twain).

We are on a path of escalation to nuclear war, nothing less – Jeffrey Sachs