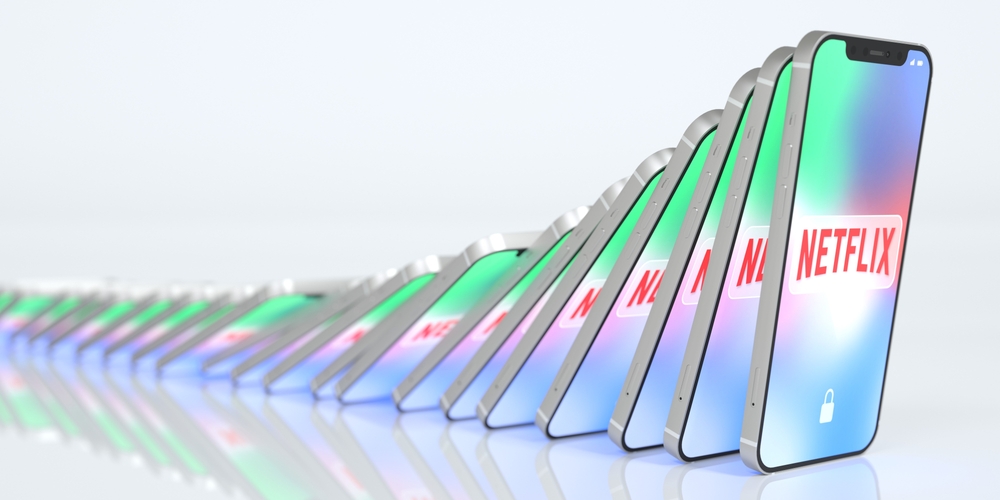 Trees Don’t Grow to the Sky

It wasn’t long ago that Netflix was hot, hot, hot and it was among those stocks that were leading the technology charge. This week the stock came crashing down as quarter-to-quarter subscriber growth turned negative (slightly) in the first quarter and the company projected a more significant decline in the second quarter. A look at the chart below would indicate that anyone could have seen this coming, if they had just removed the rose-colored glasses.

Year over year subscriber growth was beginning to slow down in 2019 (blue line), when that trend was interrupted by the pandemic, which spiked subscribers. As the pandemic progressed and eventually eased, subscriber growth was returning to the declining trend of 2019. Sequential growth (orange line), which was generally above 5% in 2017 and 2018, has been unable to breach the 5% mark ever since, with the exception of the pandemic spike. Growth was clearly on the down trend. The modest first quarter sequential decline is now expected to be followed by a more substantial decline in Q2.

Why did this happen? Did Netflix somehow mess up a good thing? Partially, that may be true. Competition, which was scarce a few years ago, is now ample. It seems like everybody has a streaming service that now competes with Netflix, and they have often been aggressive on price and been more accepting of ad revenue than Netflix has been. But we suspect the bigger issue is the law of large numbers.

At the end of the first quarter, Netflix reported 221.6 million paid subscribers. Based on that number, to produce 20% growth a year from now, Netflix would need to add 44 million net new subscribers over the course of this year. To put that in perspective, there are about 130 million households currently in the United States. Subscriber additions would need to be made in the face of enormous competition: Hulu, Disney+, Apple TV+, HBO Max, Discovery+, Amazon Prime, Paramount+, and Peacock, to name a few, and many of those did not exist 5 years ago! 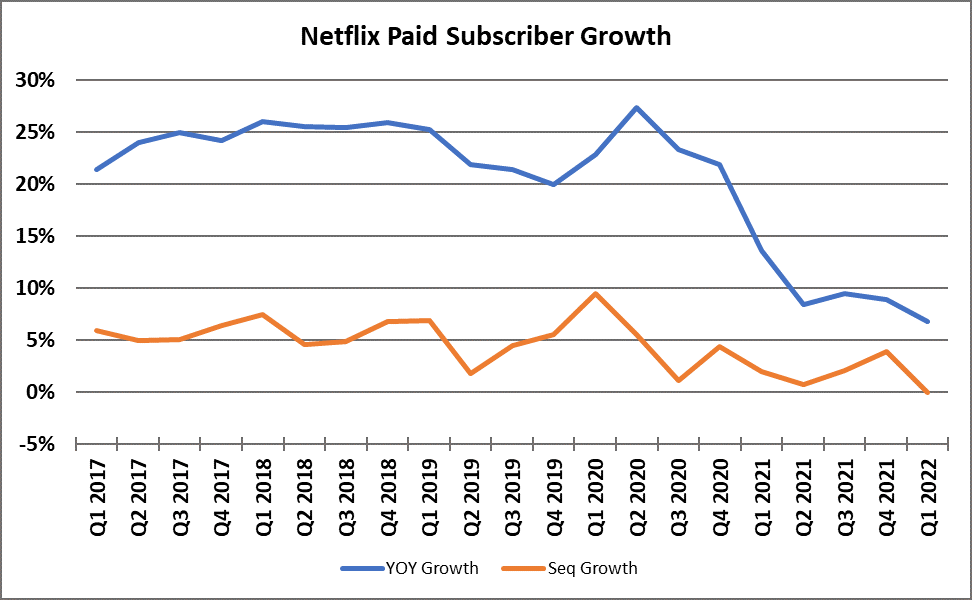 Netflix is far from unique. This is a basic story that has been, and will be, repeated time and again. Who’s on deck? It might be Apple. Don’t get us wrong, we think Apple is a terrific company, but that’s not the point. If Apple wants to keep its high valuation, it needs to grow. Here is a look at trailing 12 months revenue growth since 2007. Note that the overall trend is down. The most recent period has seen a rebound as 5G phones kicked in, but what happens after that? What does a company with an almost $3 trillion market cap do for an encore? One thing is for certain; it has to be big….VERY big. Apple is still the leader, but just like with PCs, the replacement cycle gets longer and longer and that presents a challenge after the 5G cycle has peaked. 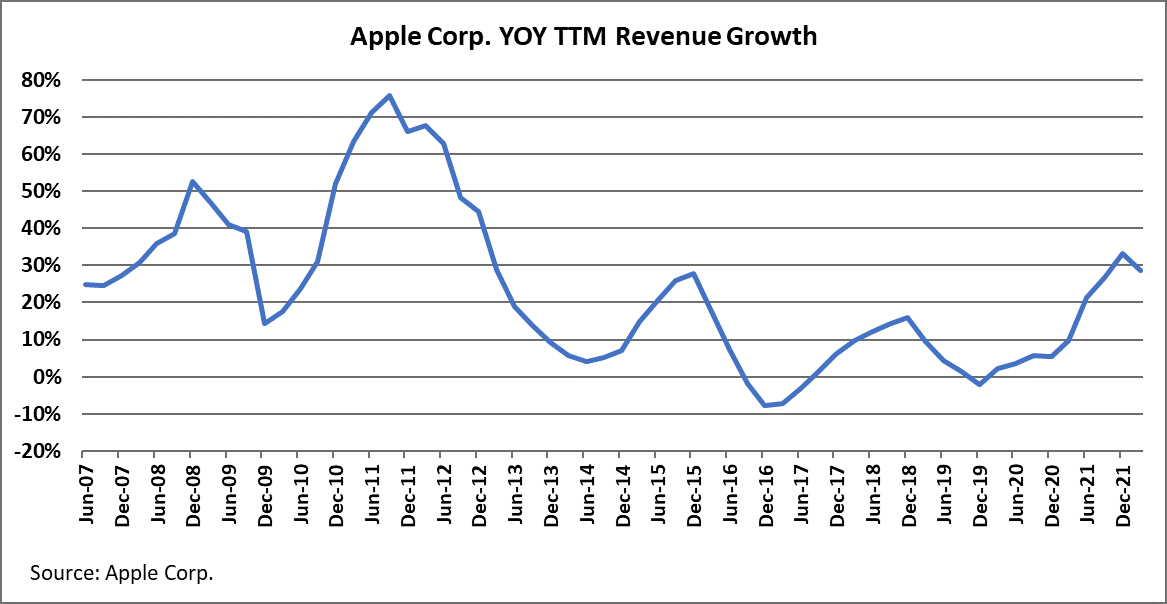 And how about Tesla? It doesn’t sell the most cars, but its valuation is light years beyond the rest of the industry. As shown below, Tesla’s market cap is about 35% greater than the next nine companies combined! The electric transformation is coming and all of those companies listed below (and many more) either are, or are about to become, competitors with Tesla and they are fully capable of being a force to be reckoned with. 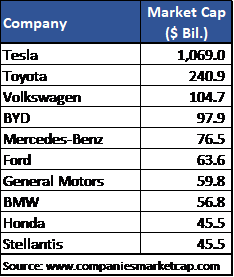 Electric cars are expensive to build and therefore generally have lower profit margins. Battery costs have been coming down for years, but the expected surge in EV demand is causing shortages in commodities needed to make batteries and those costs are starting to squeeze manufacturers. Tesla has already announced several price increases this year.

Tesla reported very strong results for the March quarter this week and expects growth of 50% or more in 2022. Tesla isn’t so big that it can’t grow, but if you want a luxury electric vehicle, there are now several to choose from with more on the way and that is a big shift. They have gone from being essentially the only game in EV town, to one of many. With the valuation Tesla has, only a modest disappointment is necessary for a meaningful correction in the stock price.

It’s impossible to know precisely when these things might happen, but it’s a very good bet that they eventually will. They always have. As each generation arrives, the market leaders of today generally become the also-rans of tomorrow.

Here is a list of the 30 Dow Industrials, considered the crème de la crème of industry, in October 1985 and today. Times sure have changed. The lesson is an important one. Don’t get married to a stock. Get married to a diversified portfolio. 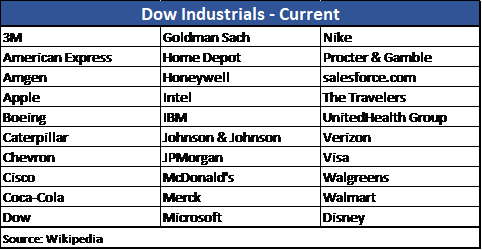 Buy Some I Bonds

You can only buy $10,000 of these for each person, but it is a high yielding, safe return. I Bonds are essentially modern saving bonds and pay interest based on CPI, which, of course, is very high right now. You have to own them for at least a year and you lose 3 months of interest if you cash out before five years, but it’s a far better return that sitting in a money market fund or a bank! See the first link in ‘What We’re Reading’ for details.

I Bonds: The Little-Known but Safe, High-Return Investment

EU closes in on Russian oil ban — but how tough will it be?

CHIPs and Science Act Aims to Preserve US Technology Edge

CHIPs and Science Act Aims to Preserve U.S. Technology Edge The CHIPs and Science Act of 2022, signed into law on August 9, is a bipartisan legislation package that provides more than $50 billion in direct financial assistance for semiconductor companies to increase U.S.-based design, research, and manufacturing capabilities. In addition, the legislation authorizes nearly […]
Read More