This Week in History

We are as tired of writing about an impending recession as you probably are reading about it, so this week we go on a historical tangent: The final nail in the gold standard coffin.

Most, if not all, of our lives have been in a fiat currency era, and even if you were alive before 1971, it’s doubtful you have any recollection of the gold standard, so the fiat currency world today is all most of us really know.

What is interesting to note is that during the time the U.S. had a hard currency (that is, currency with a tangible backing), inflation was not much of a problem (see chart below). It’s not that there was no inflation prior to 1971, but it’s very clear from the chart that something changed in the early 1970’s, and that change was the removal of the last vestige of the gold-dollar peg. The chart shows us that our recent inflation experience is really nothing new. Inflation has been on a tear since the early 1970’s. What we are experiencing now is simply more extreme than we had become accustomed to. 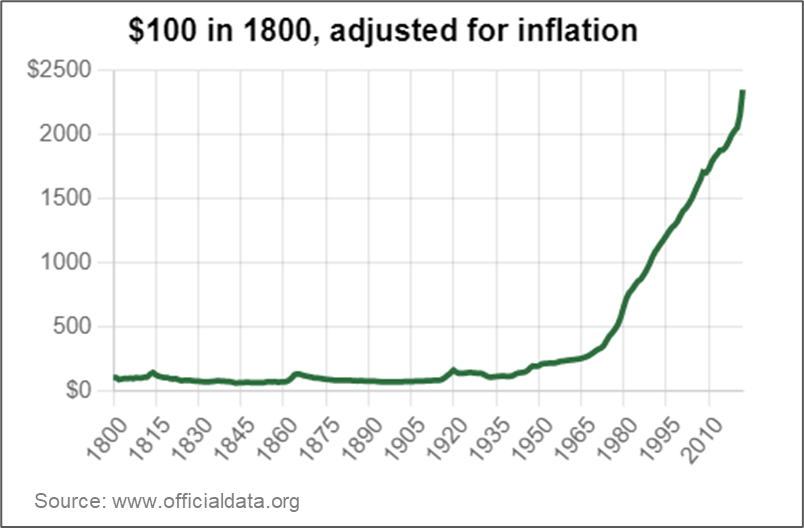 What’s the attraction of gold?

The investment community today tends to look at the world on a month-to-month basis and gold is often criticized when it fails to offset inflation over a short time frame. But gold is not in our portfolios as an inflation hedge as much as it is an insurance policy against the long-term devaluation of the dollar. Without the limiting factor of a gold backing, governments are free to print as much money as desired, and as we’ve seen over the last year few years, too much money, chasing too few goods, pushes inflation up (and the value of a dollar down).

We suspect most wealth advisors do not employ gold as a standard part of their investment portfolios, and we believe that is a mistake. Gold is not only a diversifying asset; it helps to protect the purchasing power of client assets.

Here’s what we mean. In 1930, with a kilo of gold you could buy a new Chevy. Today a kilo of gold will buy you… wait for it… a new Chevy. Governments may have officially eschewed the gold standard, but even in this modern world, central banks still shore up their reserves with the ancient relic called gold. As long as they do that, gold is still money and, more importantly, it is money that is not subject to the massive devaluation of fiat currencies.

The decline of the gold standard – A quick history

In 1933, Franklin Roosevelt signed Executive Order 6102, Section 2 of which reads: “All persons are hereby required to deliver on or before May 1, 1933, to a Federal Reserve Bank or a branch or agency thereof or to any member bank of the Federal Reserve System all gold coin, gold bullion and gold certificates now owned by them or coming into their ownership on or before April 28, 1933…” There were some exceptions, but for most, ownership of gold was limited to $100.

The reason for this action was to fight the Great Depression. The governments’ ability to increase the money supply was handcuffed by the gold standard. This action added to government gold which then allowed the printing of more money. In addition, the stated value of gold was increased from $20.67 to $35/oz., which also allowed the printing of more money.

So, what happened in 1971? One of the exceptions in 1933 was foreign governments, which could still exchange dollars for gold and vice versa. When the Vietnam War ramped up and spending grew rapidly, inflation began to pick up, making the dollar less attractive to hold. The more the inflation persisted, the more foreign governments were converting their dollar reserves to gold and draining the U.S. gold supply. President Nixon’s action in 1971 (which was supposed to be temporary) stopped that outflow of gold and ended all interchangeability between the dollar and gold, making the dollar a pure fiat currency, not backed by hard assets. Finally, in 1974, President Ford rescinded the 1933 ban on gold ownership, which allows us to own gold coins and gold bars today.

Next Week – Party in Wyoming

The official name of this annual party is the Jackson Hole Economic Symposium, sponsored by the Kansas City Fed on August 25-27. The confab hosts dozens of central bankers, policymakers, academics and economists from around the world. The participants convene to discuss the economic issues, implications, and policy options pertaining to the symposium topic, which this year is “Reassessing Constraints on the Economy and Policy”. It sounds riveting.

While the Jackson Hole symposium is always an important event for market seers, it is particularly important this year as the Fed is, according to some, reaching a crossroads as it attempts to tame inflation without sending the economy into a tailspin. You can expect every word to be dissected as to its inner meaning about what exactly the Fed is planning to do next. We suggest you don’t pay too much attention. We’ve got you covered.

Our expectation is that the Fed will twitch a little bit in a hawkish direction (that is raise rates more/longer). Our reasoning is simple. The Fed needs the economy to slow if it is to control inflation. Over the last month, market interest rates have been declining and the stock market has been rising, all of which works against what the Fed is trying to achieve. A little hawkish commentary could go a long way to tweaking markets back in the desired direction.

Germany has worked hard to shore up winter gas supplies

ZEW index adds to bad macro news out of Germany

Good News is Good News is Bad News A lower-than-expected CPI report for July (8.5% vs 8.7% expected) had markets rallying in expectation of interest rates quickly coming back. But stronger markets make the Fed’s job more difficult, potentially leading to more rate increases than expected. It is unlikely that would be received well by […]
Read More

Trees Don’t Grow to the Sky Netflix was down almost 40% this week as paid subscribers declined Q-to-Q for the first time It wasn’t hard to see this coming, although it was very difficult to time precisely The larger a company becomes, the harder it is to maintain rapid growth But Wall Street doesn’t change; […]
Read More