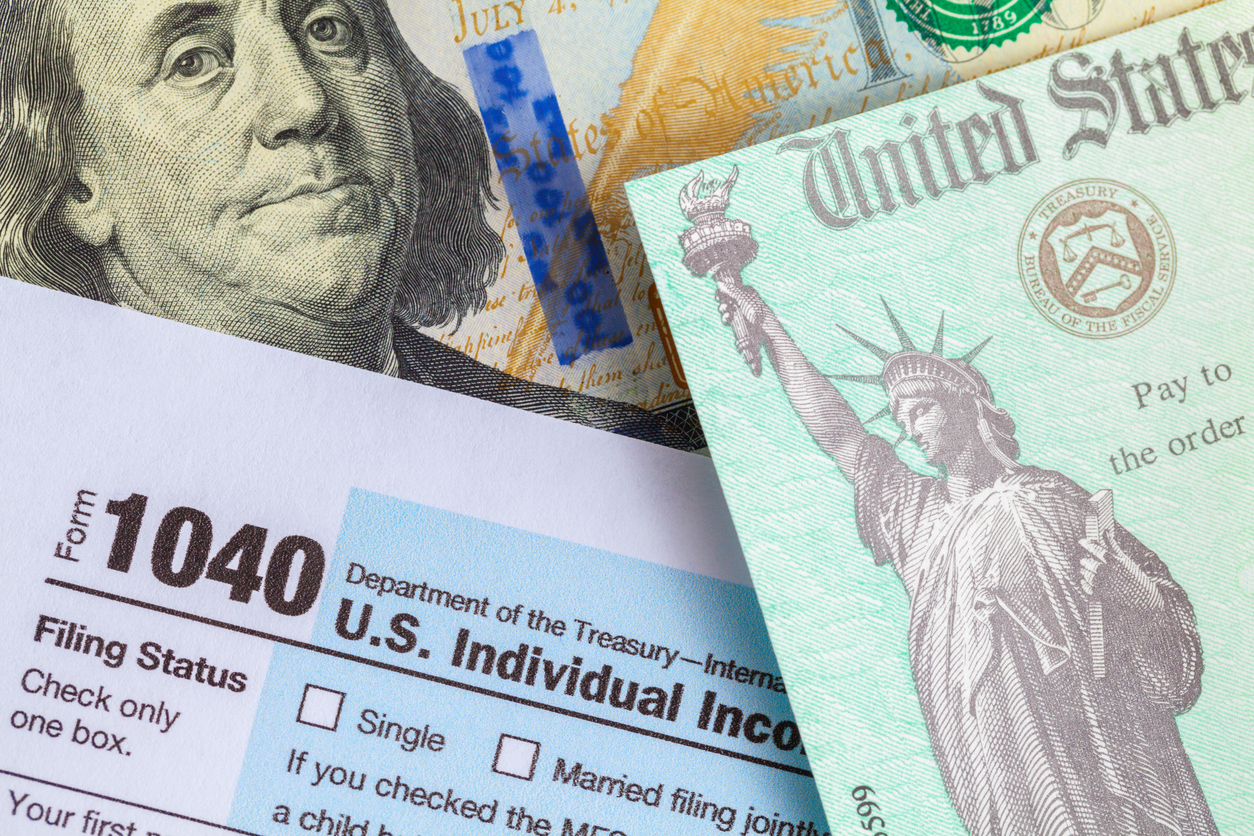 Taxes Are Headed Higher – Why You Shouldn’t Worry

Even the slimmest of legislative majorities is a strong incentive to propose big plans and this time around is no different. Ironically, much like President Trump, President Biden is actually seeking to implement his campaign promises, breaking a long political tradition of promising everything and delivering little. You can agree or disagree with the current and/or former President, but it is a refreshing political change to have politicians at least attempt to do what they say will do on the campaign trail.

While the intentions are good, we are much more concerned with results. Of course, we have no crystal ball, but we can take a hard look at the dynamics of this situation and handicap the outcome accordingly. After the Georgia Senate elections in January, we commented that the 50-50 split in the senate would make several Senators the key votes on legislation, with the most prominent being Joe Manchin of West Virginia, the blue Senator in the red State of West Virginia. Biden’s infrastructure plan and the associated tax proposal to pay for it (or at least some of it) has already raised Manchin’s visibility level nationally.

Candidate Biden’s tax intentions were well known even before he was elected, so the fact that the stock market had a hiccup on the day his proposal was unveiled was a bit of a surprise, specifically because the proposal was NOT a surprise. In any event, the shock wore off quickly, leading us to speculate that the correlation was coincidental. Nonetheless, it has sparked a wave of commentary on the implications of higher corporate and individual taxes.

Economic Impact is Expected to be Minor

Economic concerns, relative to the tax increase, are real, but probably overblown. Taxes certainly affect investment decisions by corporations and individuals, but it is far from the only factor, or even the largest factor. Citibank research produced the following chart indicating little correlation between GDP growth and the top marginal tax rate historically. (We apologize for the quality of the graphics, which are poor on the original.)

Going back to the 60’s and 70’s, the top marginal tax rate was 70% or higher, yet GDP growth was actually higher than in the recent past. The slowing growth we have experienced over the last 30-40 years has many causes, but high marginal tax rates do not appear to be one of them.

What is clear from the chart is that economic growth in the U.S. has become increasingly problematic, particularly over the last 20 years. From that perspective, raising taxes could conceivably put a further crimp on economic growth. 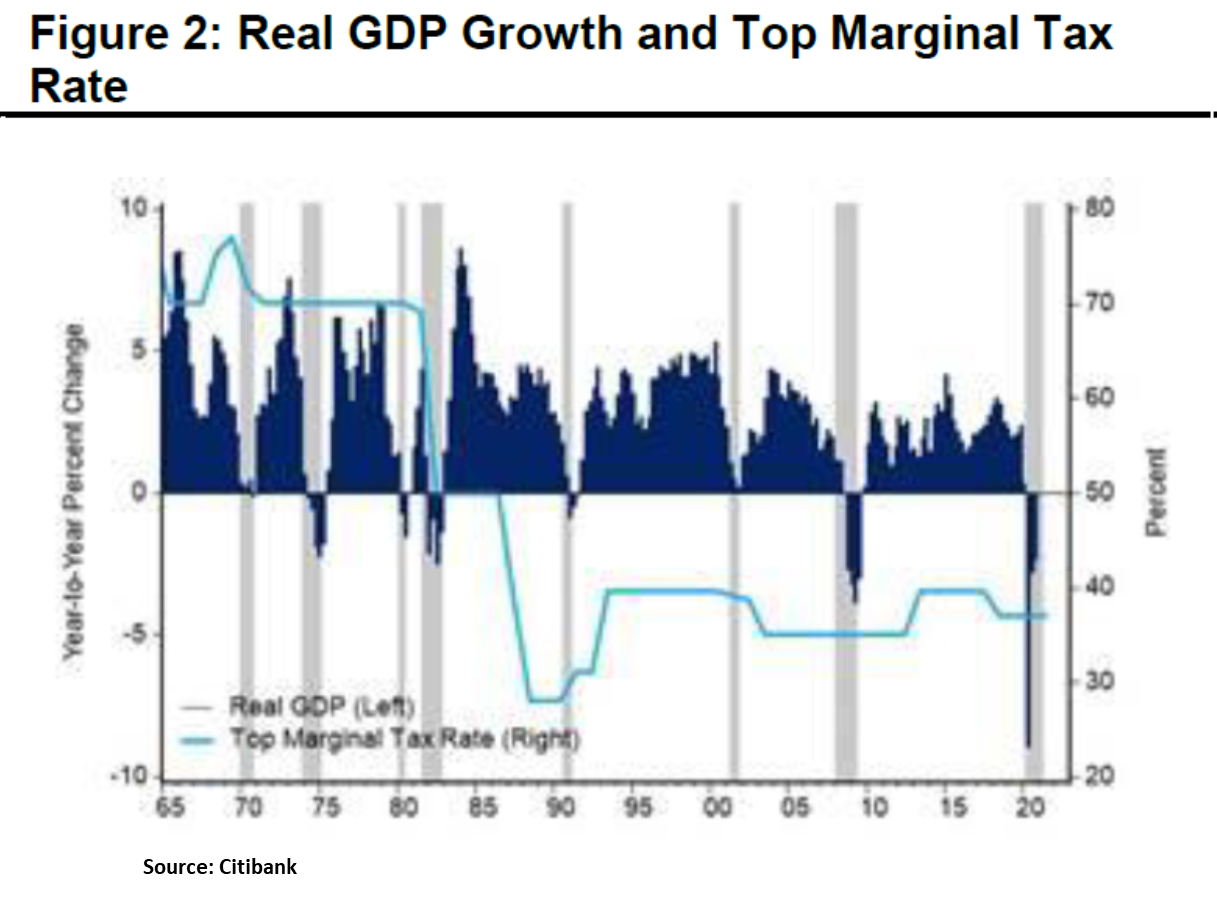 The offset to that negative growth impact is that the tax increase is being used to implement a potentially massive infrastructure plan. Even with higher taxes, it is hard for us to imagine a scenario where infrastructure spending is not substantially larger than any tax increase.

In terms of economic growth, the ultimate reaction to the combination of fiscal spending and tax increases will be a function of how much of each is actually passed by Congress. An anemic infrastructure plan combined with an aggressive tax increase, would quite clearly imply a net economic negative; while an aggressive infrastructure plan combined with an anemic tax increase would likely promote faster economic growth. The proof of the pudding is in the eating.

What Should We Expect?

We should not expect anything like the Biden tax proposal to pass and one of the key reasons is Senator Manchin. This CNN interview with Senator Manchin makes it abundantly clear that he has no intention of voting in favor of the legislation as proposed, nor is he in favor of using the reconciliation process to push legislation through Congress with no Republican support.

So, will taxes be raised? We think the odds are something on the order of 99%, but not to the extent of the Biden proposals. We believe corporate taxes are likely to settle in the 25% area, up from 21% currently. Why? We need to stay competitive in a global economy and many other developed countries tax rates are actually lower than our current 21%. (See chart on the next page). 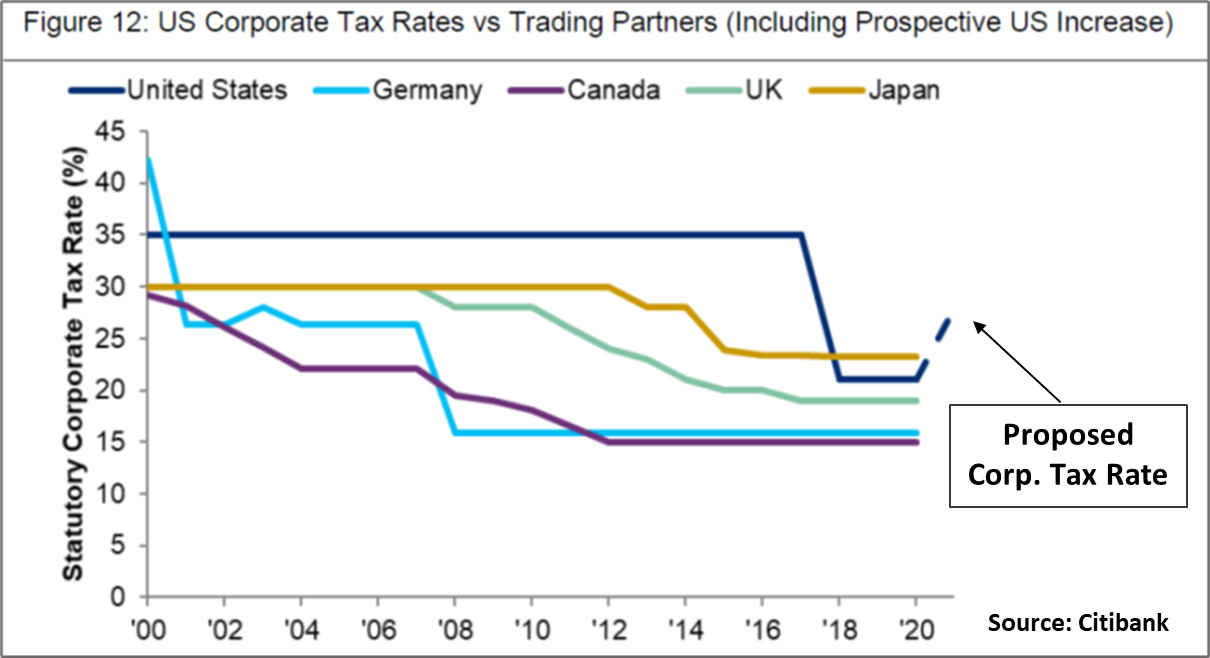 On the personal side, look for the capital gains tax to increase too, but not to the proposed 39.6% rate. We suspect that a 28% rate is a more realistic place for a compromise to be realized, and that is only for those making over $400,000 annually. As seen in the interview, Senator Manchin appears to be more interested in closing existing tax loopholes before he can support large tax increases.

At this point it is not clear if the Biden plan will change the current 20% tax rate on qualified dividends. Should the capital gain rate be materially higher than for dividends, it would 1) favor dividend paying stocks, and 2) reduce the level of buybacks as dividends would then become the most tax efficient method to return capital to shareholders. We note that buybacks have been an important source of demand for stocks for many years and a reversal of that trend could have negative consequences for the stock market. We suggest that as these plans are rolled out, it will be important to understand how dividend income will be taxed as compared with capital gains.

Historically, tax increases have not had an outsized impact on the stock market, although it has been a very long time since tax rates were as high as currently proposed. The Clinton tax increase of 1993 had an initial kneejerk reaction much like we saw when the Biden plan was announced, but by the time the Clinton increases were enacted, the stock market response was actually positive. Nonetheless, what happens this time is around is up for substantial debate. As shown below, based on forward P/E ratios, the market appears ahead of itself as well as markets outside the U.S. It may be that this is the excuse the market needs to take breather.

How the Fed may ace, or flub, its inflation call

Transportation Sec’y Buttigieg on finding a bipartisan agreement on infrastructure

Troubling trends are bubbling up in the housing market

Inflation And Retirement Investments: What You Need To Know

Even in normal times, anyone who’s planning for retirement or is already retired worries about running out of money. The potential for rising prices only adds to that baseline of anxiety.

Heirs and hedge fund managers might take a hit, but tens of millions of families and lower-paid young singles will come out ahead with fatter tax credits.

What ‘Non-Financial Assets’ Should Be Included in Your Estate Plan?

In late March, Pfizer and BioNTech began a clinical trial testing their vaccine on healthy 6-month to 11-year-old children.