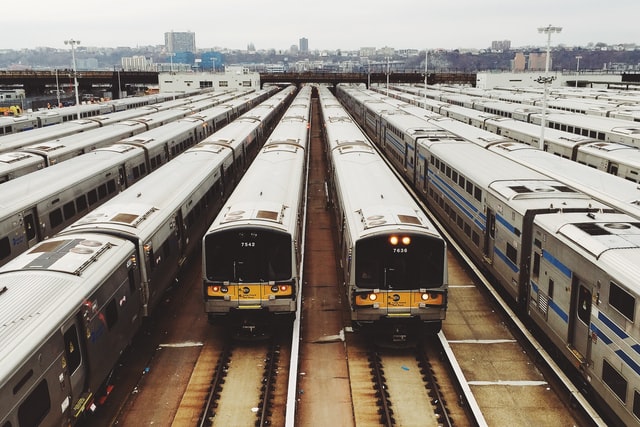 There was a lot of talk about infrastructure this week and much of it was rather confusing. First the Senate passed the $1 trillion bi-partisan infrastructure bill, which addresses traditional infrastructure spending, like roads, bridges, broadband, community redevelopment, etc. That was followed shortly thereafter by passage of a $3.5 trillion budget resolution that included all of the Biden Administrations expanded infrastructure proposal, pushing both measures to the House. That left everyone looking for the beneficiaries and there were a bunch. Nucor rose 17%, Caterpillar rose 6% and United Rentals rose 9% this week. Although markets responded like this was a done deal, they probably should not count their chickens before they hatch. Passage of all or part of these proposals will likely be significantly more difficult.

Despite the markets positive reaction to congressional actions, neither plan appears to be a shoe-in. Without a consensus within the Democratic party, ultimate passage will be very difficult. This is a significant test on Biden’s ability to bring his party together.

The August U Mich Consumer Sentiment Index Collapses to 70.2, Lowest Since 2011.

There has been an ongoing debate about interest rates with one side believing that interest rates were far too low given the growth in the economy, and the other declaring that the bond market is telling something very different about the future (i.e., slower growth) than appears logical. These crosscurrents were apparent in the news all week, but on Friday interest rates were down big as the U Mich consumer sentiment index surprisingly fell below pandemic levels! The Economic Conditions and Consumer Expectations Indexes also had sizable declines and also to levels not seen since 2011. Although the bond market clearly viewed this news as material, the stock market seemed unperturbed and waffled near unchanged all day on Friday. 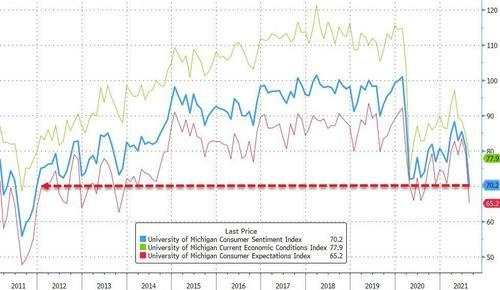 Richard Curtin, chief economist for the University of Michigan’s Surveys of Consumers described this month’s decline in consumer confidence as “stunning” and widespread across income, age, educational and even political subgroups in every region of the country. He stated in a release “Over the past half century, the Sentiment Index has only recorded larger losses in six other surveys, all connected to sudden negative changes in the economy,” Two of those were in the fairly recent past — April 2020 amid the pandemic and October 2008, at the start of the Great Recession.

The Michigan Consumer Sentiment Survey was not the only sign of potential economic weakness. The International Energy Administration released its flagship Oil Market Report for August this week. Here are some excerpts from that report:

“A new OPEC+ deal struck last month will go a long way to restore (oil) market balance. The immediate boost from OPEC+ is colliding with slower demand growth and higher output from outside the alliance, stamping out lingering suggestions of a near-term supply crunch or super cycle. Oil prices offer more evidence. A recent rally has lost steam on concerns that a surge in Covid-19 cases from the Delta variant could derail the recovery just as more barrels hit the market. Brent futures slumped from a high of $76.40/bbl in early July to around $70/bbl at the time of writing.”

“Global oil demand estimates have been revised lower since last month’s report, in part due to the inclusion of more complete historical annual statistics… Growth for the second half of 2021 has been downgraded more sharply, as new Covid-19 restrictions imposed in several major oil consuming countries, particularly in Asia, look set to reduce mobility and oil use.”

“Meanwhile, global oil supply is ramping up fast. In July, producers boosted output by 1.7 mb/d, as Saudi Arabia ended voluntary curbs and the North Sea bounced back from maintenance. Supply is expected to rise further after the producer bloc agreed a deal on 18 July that aims to raise production by 400 kb/d a month from August until the remaining cuts are phased out.”

“Global oil inventories have been falling sharply… Stock draws could persist for the remainder of the year assuming sanctions continue to shut in Iranian crude.”

“But the scale could tilt back to surplus in 2022 if OPEC+ continues to undo its cuts and producers not taking part in the deal ramp up in response to higher prices.”

Our Take: The more important news here is that the Delta variant is having a negative effect on global economic activity and that case is supported in the commentary above. While there some early evidence that the COVID surge in the largely vaccinated United States and Western Europe could be close to a turning point. The question is whether less vaccinated Asia remains vulnerable for a while longer, which carries risks for the growth and inflation outlook in the U.S. Slowing growth in Asia would likely find its way to our shores and as the primary source of supply, current shortages could be extended, pushing inflation pressures higher. Thus, the risk that is not being discussed much is a stagflationary trend that could pressure asset values. For more detail, see Real-Time Data Suggest Asia’s Economy Already Feeling Delta Hit; China coronavirus infection closes shipping terminal at massive Ningbo Port and Stocks struggle for another record as consumers show ‘stunning loss of confidence’ in the links below.

How would Biden’s infrastructure plan work?

The Last Wave For Delta Variant?

China Crackdown is About Political Control

Life Insurance Has A Lot Of Benefits And Benefactors After Retiring

Life insurance is a critical component of financial planning. It is something to consider before retiring, but there are advantages to having life insurance after retiring.

Estate Planning vs. Will: What’s the Difference?

An estate plan is a broader plan of action for your assets that may apply during your life as well as after your death. A will, on the other hand, dictates where your assets will go after you die.

While IRAs are a great tool for retirement savings, they also have a number of rules and regulations that can be quite hard to understand.

How to Debloat: 8 Simple Steps and What to Know

There are plenty of simple strategies you can use to quickly beat the bloat.

Nine Positive Indications That You Could Make the Switch to Entrepreneur

Most people think success depends on first having that innovative and unique idea, but I beg to differ.