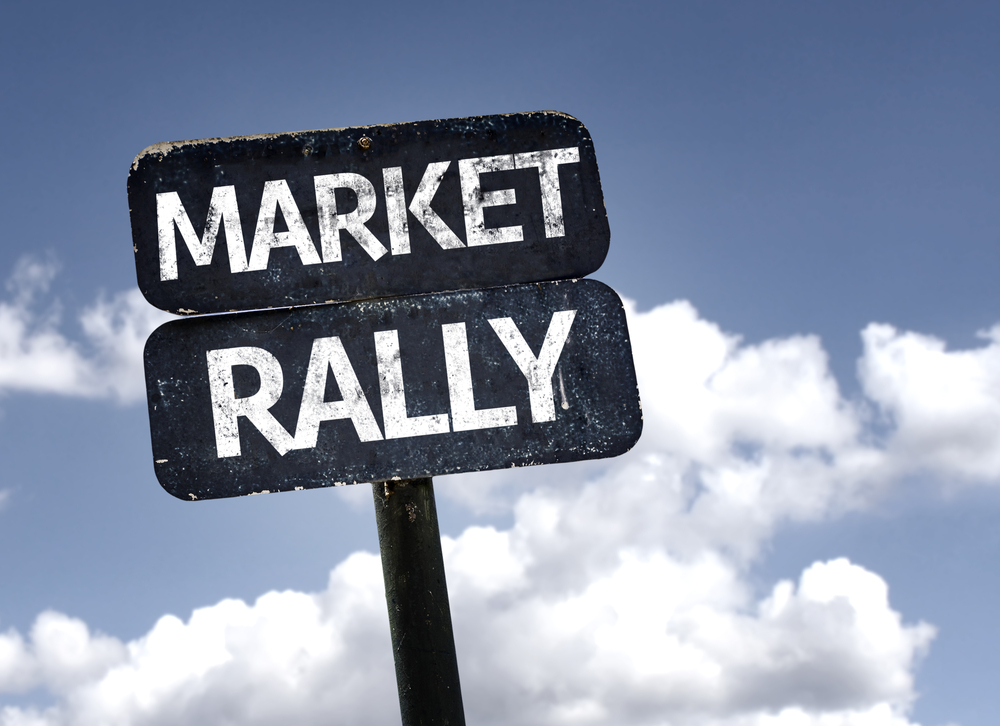 Is There Really a Santa Claus?

Wednesday was one of those amazing days with the S&P 500 index rising 3% for the day! The bull must be back, right? Not so fast… We’ve said this a few times in the past, but we’ll say it again. The best days in stock market history have occurred in bear markets!

While the +3% day we had this week was impressive, it still isn’t close to being the best. Nevertheless, we note that 20 best daily percentage gains (below) all occurred in a bear market. These big up days can be a welcome gift when markets are tough, but don’t read too much into it. Year-end ‘Santa Claus’ rallies may be real, but Santa Claus is not.

The banter about the terminal rate, the yield curve, inversions, etc. are seemingly endless in financial media and they get plenty of attention in the MSM too. We are probably as guilty as any about tossing around these terms without much consideration to our readers, so we thought it would be a good idea to explain a bit about what these things are and some theories about why they happen. Keep reading, and begin to understand the financial news today.

A yield curve is a line that plots yields (interest rates) of bonds having equal credit quality but differing maturity dates. Given this definition, there a lots of different yield curves out there, but the most important is the Treasury yield curve because the treasuries are considered ‘risk free’. Risk free doesn’t mean that you can’t lose money, it simply means that there is a virtually 100% chance that the interest and principal payments of your Treasury bonds will be paid (i.e., there is no credit risk). Other bonds that are not guaranteed by the government have some higher level of credit risk and those bonds should have higher yields than government bonds. For example, bonds rated BBB, rather than AAA, would have higher yields, otherwise called a spread. If the 10-year Treasury is trading at a yield of 4% and BBB bonds are trading at a yield of 7%, the spread is 3%. Spreads vary over time based on economic conditions. When things are good, spreads can be very low, but when the economy gets skittish and risks arise, that spread will widen. Don’t forget that when yields go up, bond prices go down, so when spreads widen, generally, bond prices are going down.

The Treasury yield curve is very closely watched by economists and market observers because historically, the slope of the yield curve gives an idea of future interest rate changes and economic activity.

In the chart below, the blue line depicts the yield curve on July 1, 2015. This is an example of a normal, upward sloping yield curve, where yields increase with time. (Example, the 10 year bond yields more than the 5 year bond.) The reason this is normal is that bonds should theoretically compensate investors for anticipated inflation. Over a very short time frame, it is often relatively easy to estimate where inflation will be, but over longer terms, there is more risk that an inflationary event will occur, so long term yields are normally higher than shorter term yields.

The red line in the chart below is the yield curve on November 30, 2022. It is anything but normal. The yield curve is currently inverted, meaning that short term bonds have higher yields than long term bonds. Historically an inversion of the yield curve has been an indicator of an oncoming recession although generally, the recession begins after the inversion has reversed. 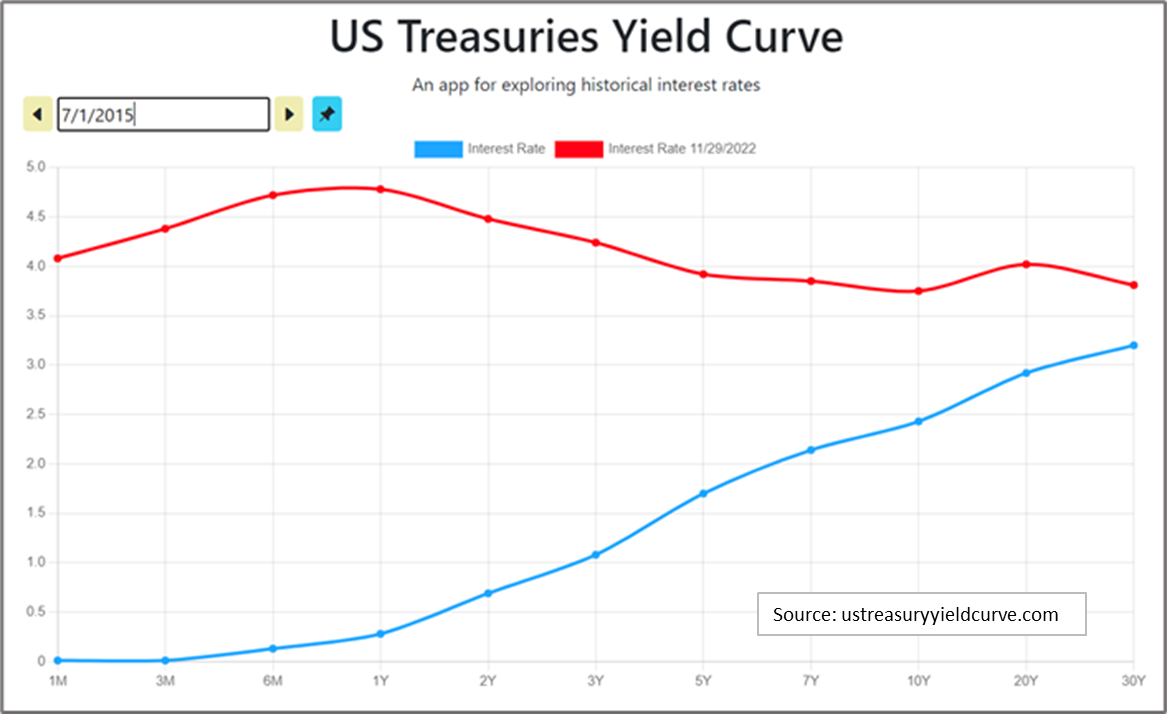 There have been 9 U.S. recessions since 1960, and in each case, an inversion of the yield curve preceded the start of the recession. The yield curve is currently inverted (in fact, very inverted) so naturally, there is concern that another recession is about to begin. But an inverted yield curve does not cause a recession, rather it is function of how markets anticipate events. But which inversions should we watch? Some pundits like to watch the 5s30s, which is the spread between the 5 year bond and the 30 year bond. Others focus on the 2s10s. In theory, the preferred measure of the Federal Reserve is the 3mo10s.

The simple answer is that when markets ‘see’ a recession coming, investors prefer long term bonds. The reason is that when recession strikes, the Fed responds by lowering interest rates. Long term bonds respond much more positively to falling rates than short term bonds and therefore offer greater profit opportunity. (Again, don’t forget that when rates go down, bond prices go up.) The result is that the natural market reaction to the recognition that economic weakness is approaching is to sell short term bonds and buy longer term bonds. When there are more sellers than buyers for short term bonds, prices go down (i.e., yields go up). Likewise, more buyers than sellers for long term bonds implies that prices rise (i.e., yields come down). Presto! You have a yield curve inversion.

The yield curve has been a reliable recession indicator, but we always look to verify trends with other data. One such piece of data is called the Weekly Economic Index, from the NY Fed. This index tracks 10 weekly and daily data points that cover consumer behavior, the labor market, and production. These are used to track the likely path of economic activity and it is shown below. The 10 data points are:

The index level is now back where it was before the pandemic, but the trend remains firmly down. If this index continues the downtrend, indications of a recession will become much clearer.

Can This Man Defuse the Debt Bomb?

Payrolls and wages blow past expectations, flying in the face of Fed rate hikes

Bottoms Up! In his classic 1934 book “Security Analysis”, Benjamin Graham, the father of value investing (and a mentor to Warren Buffet), said something to the effect that in the short run the stock market is a voting machine, but in the long run, it is a weighing machine. Eighty-nine years later, that comment still […]
Read More

What Do You Think?

What Do You Think? Our inboxes are full of market and economy projections for 2023, most of which are completely worthless. In early December, 2021, Reuters ran a story with this opening line: “The S&P 500 will gain 7.5% between now and the end of 2022 to finish at 4,910, driven by earnings and economic […]
Read More

Nothing to See Here… Move Along…

To be honest, we’re getting pretty tired of dealing with market fireworks every time the Fed provides a hint of what they are going to do next. Traders are logically obsessed, but investors need not be dragged into this obsession. This week was a perfect example. The market twitched wildly to the perception of a […]
Read More