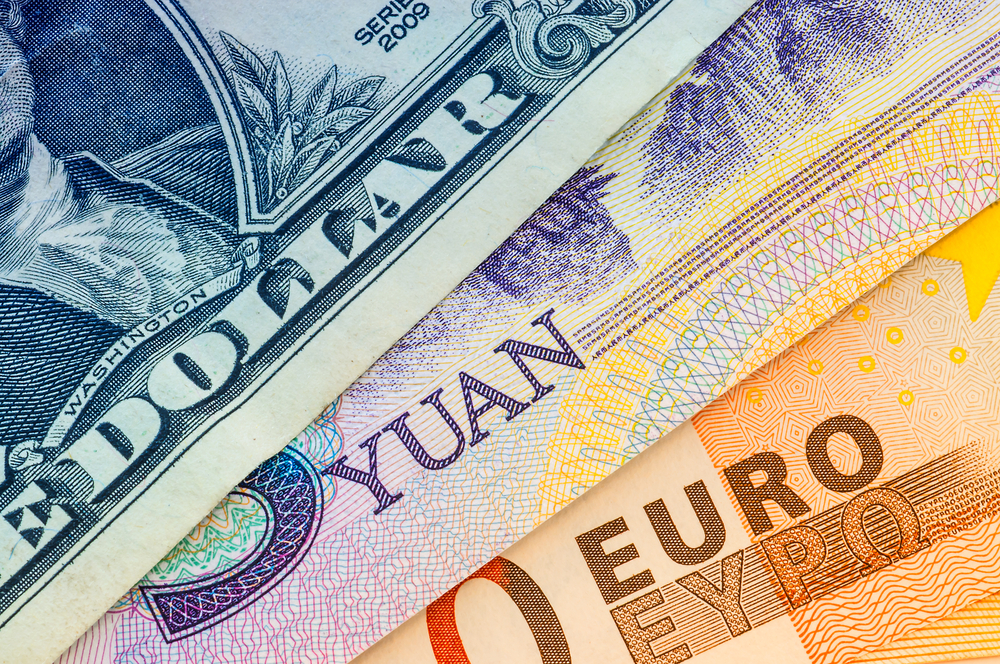 Is It Time to Pay More Attention to Bitcoin and Other Crypto-Currencies?

What Is a Reserve Currency?

A reserve currency is any currency or precious metal that is held in large quantities by governments (central banks). Reserve currencies are the most stable currencies, issued by stable governments and are used to make large international transactions, which minimizes currency translation risks.

In order to function as a reserve currency, it must:

The dollar was first recognized as the primary reserve currency in the Bretton Woods Agreement of 1944. Its clout in world trade grew rapidly from that point, as shown in the graphic below and the dollar remains the primary currency of choice for large international transactions, like oil and other commodities. Having reserve currency status imparts certain power to the U.S. and is the reason that economic sanctions can be effective. 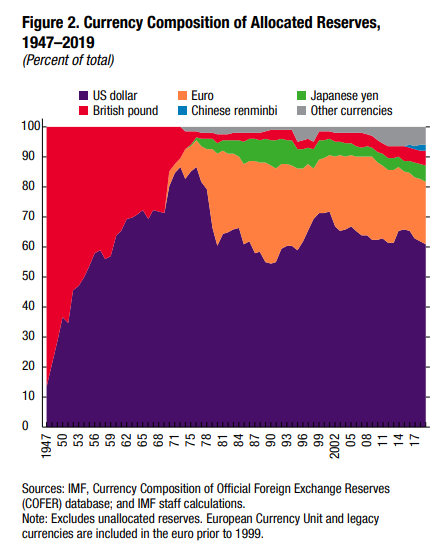 The rise of other economies, like China, and the use of sanctions against other central banks, specifically Russia, raises questions in other countries about the advisability of having the preponderance of reserves in dollars. In short, what is to stop the U.S. from sanctioning others? Russia’s economy is quickly feeling the pain of those sanctions, but it is also providing ample incentive for Russia and China to transact in Rubles, or Yuan in place of the dollar. If that trend were to expand, it could enable a decline in the ability of the U.S. to project power globally via sanctions, and implicitly forcing the U.S. to rely more on military might.

Is the Dollar Threatened?

Our fiscal irresponsibility is a long-term threat to the dollar as that ultimately undermines the stability of the dollar, if not addressed, but that does not appear imminent. Nonetheless, the dollar is often described as ‘the cleanest dirty shirt in the laundry’ because the dollar’s status has slowly been eroded since its peak in the early 1970’s. But, if the power of the dollar is to decline, the power of some alternative must also rise and no other currency appears ready to replace the dollar. The Euro is handicapped by the lack of a political union. In the U.S., all Treasury debt is the same, but in Europe, German government debt is a far cry from Italian government debt, despite both being priced in Euros. As a result, the Euro is fundamentally handicapped in any effort to become the primary reserve currency.

There is also persistent speculation that the Chinese Yuan is positioned to replace the dollar, but to be a reserve currency, the free flow of capital must be allowed over borders to facilitate large transactions. China is not in a position to accommodate that because if capital flows were free, there would likely be a massive flow of capital out of the country as the Chinese elite seek to limit their dependence on the CCP. The Yuan has some attraction as a reserve currency, but without a mechanism to allow free capital flows, that is simply impossible.

One thing that appears to be better positioned to potentially act as a reserve currency are crypto currencies, such as Bitcoin and Ethereum. For countries that desire a disconnection from the dollarized Western world, crypto currencies could be an option. Certainly, Russia would have been better served having some reserves in ‘unsanctionable’ Bitcoin as opposed to dollars and crypto currencies now have a market cap of roughly $2 trillion, so liquidity is improving.

Our primary concern regarding cryptos is, and has been, government regulation. All governments rely on the ability to control the money. Without that, there effectively is no government. As such, there is a natural tension between crypto currencies and government. If cryptos become a threat to the official currency, there is a very real risk of the crypto being banned by government. However, the Ukraine conflict brings up a situation where governments of some of the largest and most powerful countries on earth could embrace crypto currencies and that would be a giant leap in the legitimatization of crypto currencies. After a long pregnancy, maybe the birth of a new ‘independent’ reserve currency is finally being born.

The fact is crypto currencies are finally offering individuals and investors freedom from their own government’s currency. This has not been lost on the governments, and they are seeking to pursue controls around their use, and even initiating their own digital money. Chris Giancarlo lays out this conflict in his book, “Crypto-Dad: The Fight for the Future of Money”. This represents the first true “unrestricted currency” choice for individuals, and it has set up a conflict with some citizens and their governments as to who is in control.  It will be interesting to watch how this plays out over the next several years.

Why the Federal Reserve raises interest rates to combat inflation

It’s the beginning of the end of globalization

Semiconductors are like oil — making more in U.S. can avoid global crises

How Cryptocurrency Is Helping Ukraine

The Long and Short of Interest Rates When the week started, it appeared that short-term rates would be the ‘story of the week’ due to a planned drain of Treasury cash (See “Are Negative Rates Coming Despite Fed Opposition”, below.) However, on Thursday, long-term rates took center stage as the 10-year yield jumped from a […]
Read More